The Untamed Savannah Pack
Do you wish to participate in this forum? Well come on in and register! Untamed Savannah Pack is an African Wild Dog RPG, but you may also play as a wolf (only African wolf species are accepted) and have a second character such a lion, cheetah, etc.

We are always open to accepting new members into this pack, so come on in and join the close knit family of ours.

Join the forum, it's quick and easy
The Untamed Savannah Pack
Do you wish to participate in this forum? Well come on in and register! Untamed Savannah Pack is an African Wild Dog RPG, but you may also play as a wolf (only African wolf species are accepted) and have a second character such a lion, cheetah, etc.

We are always open to accepting new members into this pack, so come on in and join the close knit family of ours.
The Untamed Savannah Pack
Would you like to react to this message? Create an account in a few clicks or log in to continue. 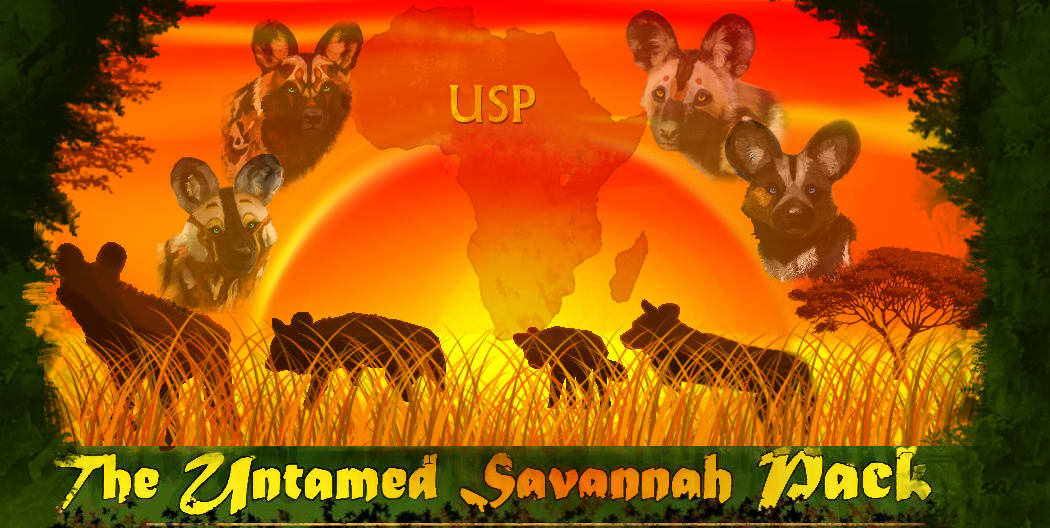 Log in
IMPORTANT TOPICS
Come get a den! https://untamedsavannahpack.rpg-board.net/t79-dens-for-members#487
Latest topics
» Age of the Wolves

if you're still free start runnin' away
the whole world must watch the sad comic display
HEIGHT~33 inches
WEIGHT~39 kg
BUILD~She is quite slim and tall. She has long, muscular legs, which help her run fast, and jump pretty well. She has long jaws, a long, fluffy tail and long ears.
COAT & MARKINGS~Her fur is long, but not thick. It doesn't keep her warm, or anything. Her base color is light,orange-ish cream, which seems to be white. She has a lot of markings, and it's pretty complicated to explain.
COMPLICATIONS~She has her 'crazy' times, which can end up happy, or, of course, bad
EYE COLOR~Albino red
ADD-ONS~Croatian accent, she has scars on her front legs

I've grown tired of holdin' this pose
I feel more like a stranger each time I come home
BIRTHDAY~February, 1
STRENGTHS~Strong, long legs, good sense of hearing and smell, good at manipulation
FLAWS~Has one broken rib on the left side of her body, which makes her unable to run to long.
FEARS~Poachers
BAD HABITS~Gets annoyed really fast, which makes her go a little bit aggressive, but, she won't hurt anyone she loves, or cares about, her pack even less.
PET PEEVES~Femme canines
PERSONALITY SUMMARY~Khaleesi is very brave. She gets over protective. Sometimes, she seems to be aggressive, but, that's only because she's protective someone, or, something of hers. She gets annoyed really fast, every time someone tease her, she tries to ignore him/her, or, if he/she is just to annoying, starts growling, but, never means it. Khaleesi is loyal, and will always try her best, to do what was told to, and she even tries not to get angry at others. If she would see something wrong, and she was threatened to be killed if she tells, she will still tell someone who could help. She is never scared, she only fears the poachers, since they killed her whole family. She is very friendly and honest, when nobody is annoying her, teasing, or fighting her. She always tries to help and make friends, even if it kills her(xD).

you'll be free child once you have died
from the shackles of language and measurable time
MOTHER~Maddie/Killed by poachers=BP
FATHER~Panda/Killed(BP)
SIBLINGS~Pebble/Killed(BP)-Zagarian/Killed(BP)-Kalahari/Killed(BP)
MATE~Deamon/Dead-Shadow/Left
CHILDREN~Flame/Killed(BP)-Star/Killed(BP)-Moon/Killed(BP)-Dazy/Killed(BP)-Luna/Killed(BP)-Farrah/Killed(BP)-Pie/Killed(BP)-Love/Killed(BP)
HYSTORY~Khaleesi was Born in a litter of four. Her
three sisters, were the only ones nice to her, while being pups. Khaleesi was wise from when she was born, but she wasn't very social. She didn't know how to act near the other pups, so, they seem to ignore her. When Khaleesi was chosen to be the next leader of her pack, some got jealous and decided to take a revenge on her. While she was a sleep, they tried to attack her, but, since she had good sense of hearing, she heard them. Khaleesi wasn't the best fighter, but she was very strong and agile, so she dodged almost every attack with ease. Since the attackers weren't smart, they wasted all of their energy on attacking, and she took advantage of that, by attacking them, while they weren't ready and already tired. What they didn't know was that, there were some poachers in the area and their dogs heard all the noises, created by them. They killed Khaleesi's whole family, even her pups! She was in such a shock, she didn't eat, sleep or do anything in weeks. She killed anything that got in her way, from a mouse to an elk. After a year has passed, she found the poachers that killed her family and took revenge. As she killed the poachers, one by one, one of them broke her rib, and just as he was about to give a final hit, she killed him, by chocking him to death(Biting on it's windpipe, ect.). After that, she feed on the bodies for days, giving her strength back. She searched for a pack, a group, or anything that would take her, but they were all afraid. Years had passed, but they all still knew who she was, and that she killed everything she would see, but, none of them tought about the fact that she didn't kill any canine/wolf. She lived as a loner for one more year, still searching and hoping that someone would see, or understand what she's been trough and why she did it, it's not like she killed any wolves... or did she? She doesn't remember anything before she killed those poachers, what she did or where was she been, nothing. her memories were gone, all but the one where she lost her family. 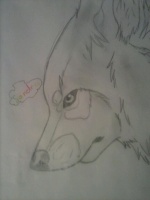